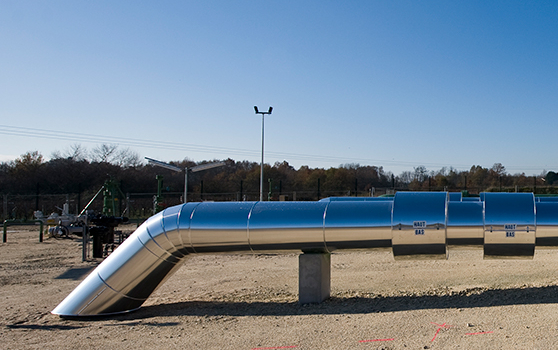 Some 98% of France’s natural gas is imported. It is brought into the country and transported to consumers via gas infrastructures, which are essential to the smooth functioning of the market and the security of supply:

CRE guarantees access to gas infrastructures. It sets the rules and tariffs paid to access the natural gas transmission and distribution networks as well as regulated LNG terminals, and also determines the method used to calculate storage tariffs. In Europe, it contributes to the work of the Agency for the Cooperation of Energy Regulators (ACER), aimed at harmonising the rules governing the operation of gas infrastructures to improve market integration.

The transmission network comprises pipelines and compression stations, and consists of:

Natural gas is transported underground through large steel pipes, travelling at around 30 km/h. It is slowed down by friction with the inner surface of the pipes, causing a drop in pressure at the network’s extremities. To compensate for this drop in pressure, compression stations (between 65 and 95 bars) are installed on the principal network, at intervals of around 150 km.

Since the implementation of Gas Directive 2009/73/EC, European TSOs have cooperated through ENTSOG, the European Network of Transmission System Operators for Gas.

LNG terminals are port-based gas infrastructures which receive shipments of liquefied natural gas (LNG) transported by ship, store it in liquid form and convert it back into gas for injection into the natural gas transmission network. France currently has four working LNG terminals.

The terminals at Montoir-de-Bretagne (near Saint-Nazaire) and Fos Tonkin (near Fos-sur-Mer) are operated by Elengy, a fully-owned subsidiary of Engie. The Fos Cavaou terminal (near Fos-sur-Mer) is operated by Fosmax LNG, a subsidiary of Elengy and Total Gaz Electricité Holding France (TGEHF). These three terminals are regulated. The Dunkirk terminal, which has been open since the end of 2016, is operated by Dunkerque LNG (EDF 65.01%, Fluxys 25%, Total 9.99%). It has a complete twenty-year exemption from regulated third party access and tariff regulation for its entire capacity. The exemption was granted by an order of 18 February 2010, following a favourable opinion issued by CRE on 16 July 2009, and in accordance with the European Commission’s opinion of 20 January 2010.

Underground storage facilities are used to adapt incoming supplies, which are received regularly throughout the year, to demand by end consumers, which is seasonal. They are filled in the summer, and the gas they contain is withdrawn during the winter, in particular during periods of very cold weather. In addition to their key role in the security of supply, these facilities are also vital for flexibility and system balancing. Since 2018, the storage sites deemed necessary to the security of supply in the Multiannual Energy Programme have been regulated.

These infrastructures are essential to the proper functioning of the natural gas market, and are operated by two companies:

CRE guarantees all market operators fair, non-discriminatory and transparent access to gas infrastructures. This is an essential role, which aims to ensure that the gas market is successfully opened up to competition for the benefit of consumers.

CRE also works to ensure that true competition is developed in the retail market. By guaranteeing all gas suppliers non-discriminatory, fair and transparent access to gas infrastructures, the regulator allows them to provide offers in the same conditions.