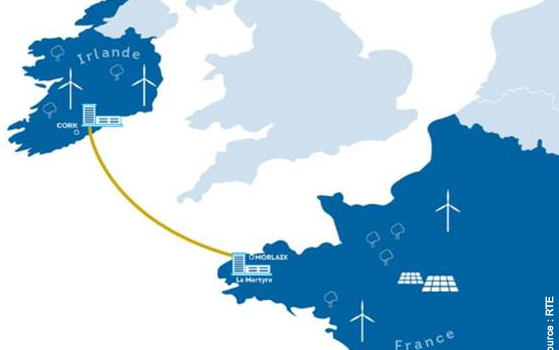 Celtic obtains an EU grant on par with the stakes

On 2 October 2019, the European Commission announced the allocation of a €530.7 million grant from the Connecting Europe Facility (CEF) for the “Celtic Interconnector” electricity project, between Ireland and France. This grant reflects the project's value in terms of solidarity and security of supply, as well as its contribution to achieving the EU’s energy policy objectives. The CRE welcomes the grant decision and confirms with the CRU its support for the project, as expressed in the joint decision of 25 April 2019.

The Celtic project, which has been designated as a project of common interest by the European Commission since 2013, will be the first interconnection between the two countries, linking Knockraha in Ireland to La Martyre in France. With a capacity of 700 MW, this project represents an investment of €930 million and is scheduled to be commissioned in 2026.

In the context of the Brexit’s discussions, the Celtic project will establish a direct link between Ireland and the EU internal energy market. It will also contribute to the development of renewable energy and bring many positive benefits in terms of security of supply and market integration for both countries and the European Union as a whole.

The CRE and the CRU had supported RTE and Eirgrid's application for an EU grant. The CRE welcomes the award of a grant covering almost 60% of the investment costs. This financial support underlines the importance of the project for the European Union. The CRE and the CRU therefore confirmed their support for the project by adopting on 10 October 2019 a joint decision confirming the cost allocation decided on 25 April 2019, namely 35% for RTE and 65% for Eirgrid.