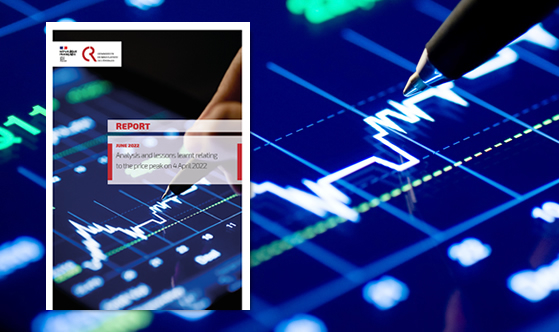 Preparing for next winter: the CRE calls for a review of the automatic rise in the price cap for the wholesale electricity market.

On 8th July, the CRE has published a report analysing the price peak observed on 4 April 2022 between 7am and 9am.
The CRE publishes today the english version of this report.

The report shows that this was an exceptional episode, resulting from a combination of different very unlikely events. Pursuant to the current rules, the event triggered an increase in the price cap from €3,000/MWh to €4,000/MWh for the entire European market.

In view of the current energy price crisis, and based on the report it publishes today, the CRE asks that the automatic rise in the electricity spot market price be reviewed, and that if no review has taken place by next October, for the mechanism to be suspended until it can be changed.

On 4 April 2022, the French electricity system experienced an episode of exceptional stress, marked by unprecedented price peaks on the French spot market between 7am and 9am. The CRE subsequently conducted an in-depth analysis to understand better the factors that led to this situation.

The report published today by the CRE shows that the price peak was the consequence of a very unlikely combination of different uncorrelated and isolated events:

These factors combined led to extremely high prices, very close to the defined ceiling of €3,000/MWh, although they could have been cut in half if the supply-demand balance had shifted by just 500 or 1000 MW.

The event on 4 April 2022, although isolated, had significant consequences for the entire European electricity market, with the automatic and non-reversible increase of €1,000/MWh in the European ceiling for the wholesale spot market price, from €3,000/MWh to €4,000/MWh. Under the ACER decision of 14 November 2017, the spot price cap is automatically raised in the 24 countries participating in the market as soon as the price reaches 60 % of the cap for one hour in one country.

The CRE considers that raising the price cap following this episode was not necessary for the European electricity market to function properly, and was even inappropriate in this period of energy crisis.

Next winter, Europe might experience similar price peaks linked to geopolitical events external to the normal functioning of the market. The price cap might then be raised several times over the winter to the detriment of consumers.

Consequently, in view of the exceptional situation we are experiencing, and in order to protect the internal electricity market and its consumers, the CRE calls for a review of the automatic increase in the ceiling prices on the spot market, at least for the period of the crisis, or even for the mechanism to be suspended if a review is not possible soon enough.

The review could, for example, be based on a proposal from the nominated electricity market operators (NEMO), who are currently carrying out a consultation on this subject. The proposal would then be put to a vote by the ACER Council of Regulators to obtain regulatory approval.